As I published in my last post, the 4th edition of the prestigious Monaco World Sports Legends Award, the Oscars of Sport took place on Friday 6 for the Media Day and on Saturday 7 December for the Award Ceremony and Gala Dinner-Show with Red Carpet held in the Salle D’Or of the Fairmont Monte Carlo.

The Monaco World Sports Legends Award aims at promoting sport’s ethical and moral values as ideals to motivate others, especially the young, to excel.

The Awarded enter the Pantheon of the World Sports Legends through impressions of their handprints.

The event was hosted in 5 languages by the international Ballet Star Lorena Baricalla, Ambassadress and Master of Ceremonies of the Monaco World Sports Legends Award.

Today I want to offer you her interview about this prestigious event.

I want to give my special thanks to Lorena Baricalla, Manuela, Promo Art Monte-Carlo Production and Dan Lavore. 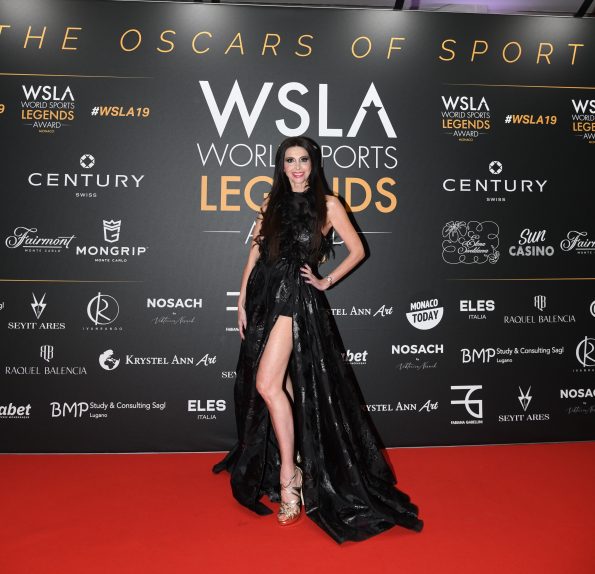 Lorena Baricalla, you’re well known for the way you can breathe life into every outfit and as a true fashion icon you know how to inspire the fashion designers. We know that for the event’s key moments you wore more than 20 outfits created by international brands. Who did you choose?

LB : As Master of Ceremonies, for the Red Carpet I chose Handmade in Italy couture dresses by Raquel Balencia. Based in Milan and Paris,she is a Spanish designer whose clothes I have worn often since last year. I admire her refined elegance. For the Award Ceremony Show I woreinnovative creations by Seyit Ares, a truly talented designer who has only recently made his debut. He creates scenographic dresses which are perfect on stage. Fabiana Gabellini created the costume for my singing performance on stage – a sparkling layered dress with stunning golden sequins.

For the WSLA Talk Show I wore contemporary, feminine styles by Eles Italia, who has been designing for me for three years and for this event created a colorful collection; Viktoriia Nosach, a Polish designer, created some very chic outfits, including the bold suit for the Press Conference and the Awards Dinner; and I wore again outfits by Seyit Ares and Fabiana Gabellini.

As well I wore a selection of precious watches, both glamourous and elegant, by the exclusive Swiss brand Century Time Gems. I honestly wouldn’t know which one to choose!

I also had the pleasure of wearing a bracelet which really moved me. Created by Mongrip, a luxury Monegasque brand, it is part of an exclusive limited collection of 161 pieces dedicated to Ayrton Senna, who we honored last year with the “WSLA Posthumous Award”. The bracelet is produced using genuine pieces of tires from one of Senna’s races.

All this is aimed at keeping the event alive throughout the year, thanks to the creative and human resources involved. 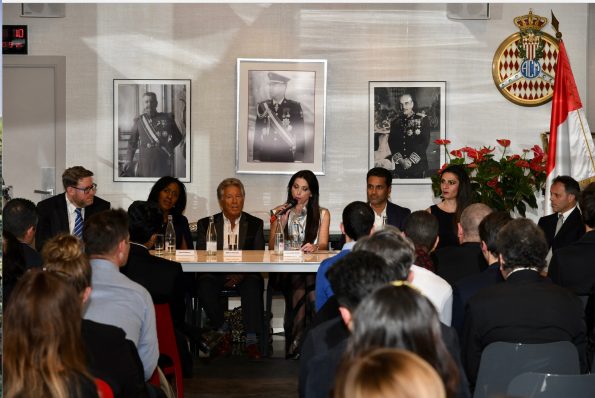 The prestigious Prize awards sporting champions, men and women, active or retired, who have gained distinction not only for their sporting exploits but also for their example, which is an inspiration for the new generations.  Who are the Sporting Stars who received the World Sport Legend Award this year?

LB : Every year we have the world’s greatest champions with us: they are extraordinary people!

I was delighted to meet Nasser Al-Attiyah, Qatar, 3 times Paris-Dakar winner (the last time in 2019), and Olympic Skeet-clay target shooting medalist. One of the greatest sportsmen of the Middle East, he is now preparing for the next Dakar race and Olympic Games in Tokyo. He is the cousin of the Emir of Qatar, Tamim bin Hamad Al Thani and he is also the Ambassador for the Football World Cup in Qatar in 2022 – a passionate and decisive sportsman.

From the USA, Mario Andretti, is F1 World Champion, Indycar and Nascar Champion. A true icon of F1, he is at the head of a dynasty of 8 racing drivers, including his son Michael and his grandson Marco. He is the only driver to have won Daytona, Indianapolis and F1 World Championship. A legendary career with 111 victories.

The great Loris Capirossi, from Italy, is 3 times MotoGP World Champion. He has one of the longest careers as a rider. He is now Safety Advisor for the International Moto Federation. His enthusiasm and down-to-earth approach are catching.

Ana Gabriela Guevara, from Mexico, is 400m World Champion and multiple Olympic medal winner. She ventured into politics and she has been nominated Minister of Sport of Mexico. She fights fiercely for women’s welfare in her country.

The WSLA Best Values Award for Community Support went to Connie Henry, Great Britain, for the Track Academy. Former international triple jumper, she founded this organization to use Athletics as a way to help young people from disadvantaged backgrounds.

The WSLA Posthumous Award went to Ferenc Puskás, Hungary, Football Champion and Legend of the Football world in the year of the inauguration of Hungary’s national stadium, which is named after him and of the 10th anniversary of the launch of FIFA Puskás Award, the global prize for the goal of the year.

The Award was received by the Puskás family represented by his great granddaughter Ane De Juan Damborena and the former President of Hungary and Olympic Champion Pál Schmitt. It was a moving ceremony for all those Hungarians who were avidly following the celebration in their country. 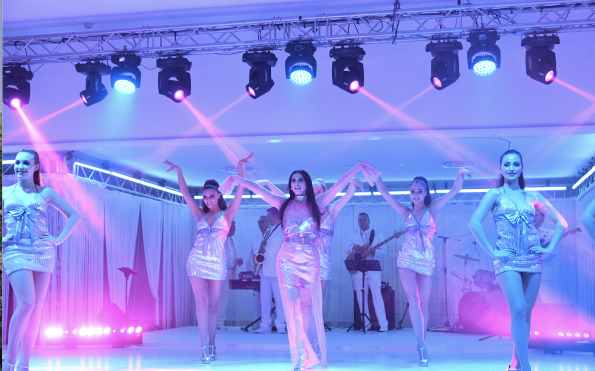 The World Sport Legends Award’s Red Carpet is among Monte Carlo’s most prestigious and has become the place to be. Who attended this year’s Award Ceremony Gala?

From the entertainment sector the American movie producer and director Julius R. Nasso, who was awarded on this occasion with a Lifetime Achievement in recognition of his worldwide successful martial arts and action movies with Warner Bros and for his work in the entertainment sector. The prize was created by the artist Ivan Rando, Lugano.  Nasso attended with the international operatic tenor Vittorio Grigolo. 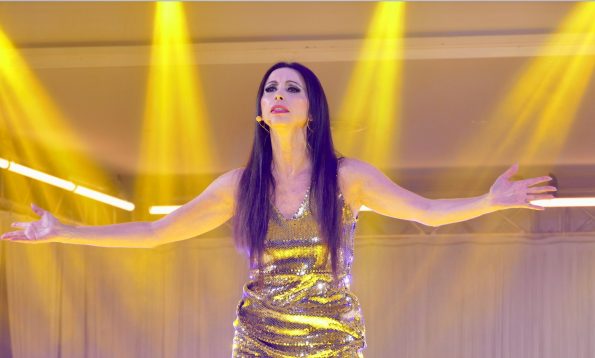 The Red Carpet, extending over more than 50 meters, was decorated with exhibitions and artworks…

LB : Yes, we exhibited the “Pantheon of the World Sports Legends” which brings together all the handprints of the Award winners created in previous editions during the “Handprints Show” with the international artist Marcos Marin. Official Artist of the Foundation of HSH Prince Albert of Monaco, he also conceived the Oscar “statuette” and decorated the Red Carpet with the works “WSLA Art meets Sport”.

As well a Memorabilia in honor of Ferenc Puskás was displayed.

The WSLA is an event which is enjoying ever greater success…

LB : Yes, it certainly is. Only three years since its inception, it is worth noting that on its 14 social networks and web channels, the Oscars of Sport attract round 4,900,000 unique views a year. In addition, as a performer, my social network channels have a large following and have over 2,000,000 unique views a year. The messages I receive each day from my followers all around the world are truly heart-warming!

What was the program for the 2-day event?

LB : 6th December was Media Day. At the Fairmont Monte Carlo from 11,30am to 6pm I hosted the WSLA Talk Show “Sporting Stars: The Men or the Women behind the Champion” and “Show, Art and Fashion”. For me the Talk Show is a privileged meeting with the award winners. A sense of friendship is quickly established. They are energetic and passionate people who have managed to surpass their limits thanks to their courage and discipline. All the Talk Shows are available on YouTube, Vimeo and Daily Motion, as well as on my social media … and I invite you to take a look at them.

Tell us about the Handprints Show for the creation of the champions’ handprints.

LB : The Handprints Show is the moment in which these great champions express their personalities and creativity  in making their handprints with the artist Marcos Marin. They make truly interesting “statements” which we exhibit each year on the Red Carpet. In just 4 years, around 30 imprints have been made and the number increases year by year.  The Art Show put on by Century Time Gems, Official Partner of the event, allowed the award winners to take part in designing a watch, according to their own individual tastes.

Where does the Official Press Conference take place?

LB : The Official Press Conference was held in the late afternoon in the Salon des Princes at the prestigious Automobile Club de Monaco, followed by a cocktail. The day concluded with the Awarded Dinner at the Automobile Club de Monaco’s exclusive restaurant. This is a very special place that only a few people can enter. It is here that all the F1 Grand Prix, the Historic Grand Prix and the Monte Carlo Rally are organized. It is a true institution of the Principality and of the world.

What is the Award Gala program?

LB : The evening was an outstanding success. On 7 December the Award Ceremony and Gala Dinner-Show, preceded by the Red Carpet with Cocktail, was held in the Salle D’Or and Crystal Gallery of the Fairmont Monte Carlo. The prestigious evening ended with the After Ceremony Red Carpet and the WSLA Party at the Sun Casino Lounge.

Particular attention was also paid to lifestyle values and the art of gastronomy. Which Chef curated the dinner?

In accordance with the partnership with the Prince Albert II of Monaco Foundation, the undertaking is to highlight the use of local and seasonal products and to follow the Mr Goodfish program for the sustainable consumption of seafood.

It also benefited from the support of the Automobile Club de Monaco, the Monte Carlo Board of Tourism and Congresses, and of the partnership of the Sun Casino.

Among the Partners were as well the Alphabet company, which operates in the Stationary sector, BMP Lugano Study & Consulting and Krystel Ann Art, contemporary art agency.

RusMonaco was the Official Magazine of the WSLA for the second year.