Fatima Nadia Rehman is an Arabic calligraphy artist, who now permanently lives in Dubai. She taught Arabic calligraphy in DUCTAC (first person to open Arabic calligraphy classes to all nationalities), undergraduate students, school children and gave a lecture of one of the only few Qurans left in the world under Sotheby’s and Christie’s at the Furjam Collection. She has also taught the royal family Abu Dhabi, Dubai and the artists of the divan of royal court of Oman. Although many of her works have been acquired by private art collectors, she has also been commissioned to produce artworks for the Royal Family of Abu Dhabi and Saudi, Galleries, Burj Khalifa, governmental organizations and five-star hotels which have her paintings on permanent display, including A.R.Rehman guitar, and works on porcelain and sculpture.She is also the winner of Al Ghurair public art commission, Marie Claire magazine inspirational women of UAE and 100 Women of UAE book.she is an entrepreneur and a visionary in the field of Arabic calligraphy and Islamic arts. 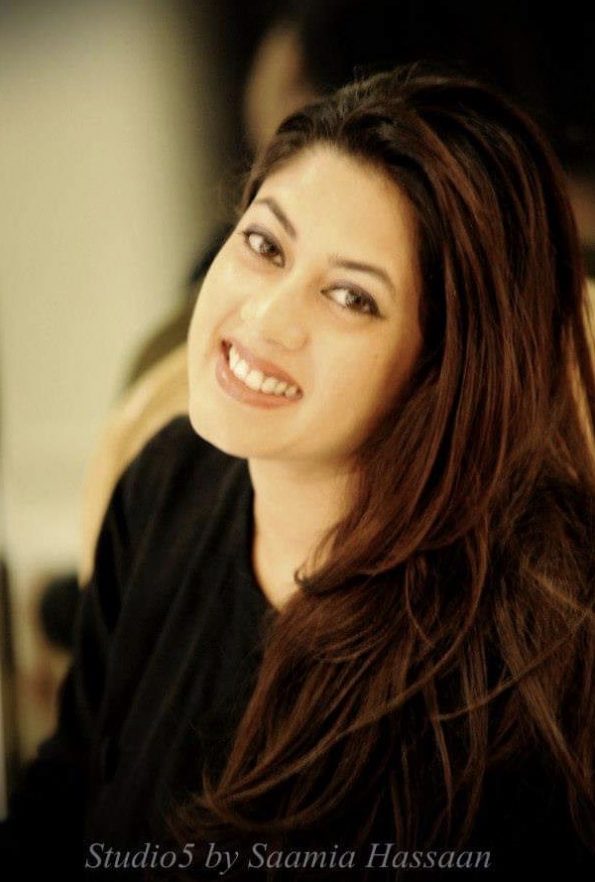 She studied in the United States in Visual Communication at the Art Institute of Philadelphia. Then moved to New York for further studies in Islamic Art History and also worked as a senior designer at the global advertising firm Saatchi & Saatchi.

When returned to her native land to pursue a Double Master’s degree in Fine Arts at the National College of Arts in Lahore, specializing in Arabic Calligraphy (khat e thuluth) and Persian and Mughal miniatures. She focused on contemporary and traditional Islamic Miniatures and borders. Her teacher being the last ustad to have learnt Mughal miniatures under ustad shuja of the last Mughal emperors court. she was her teachers apprentice. Fatima practices classic Arabic Calligraphy and modern miniatures, her style is unique in the sense that it has been distinguished by a contemporary flare. 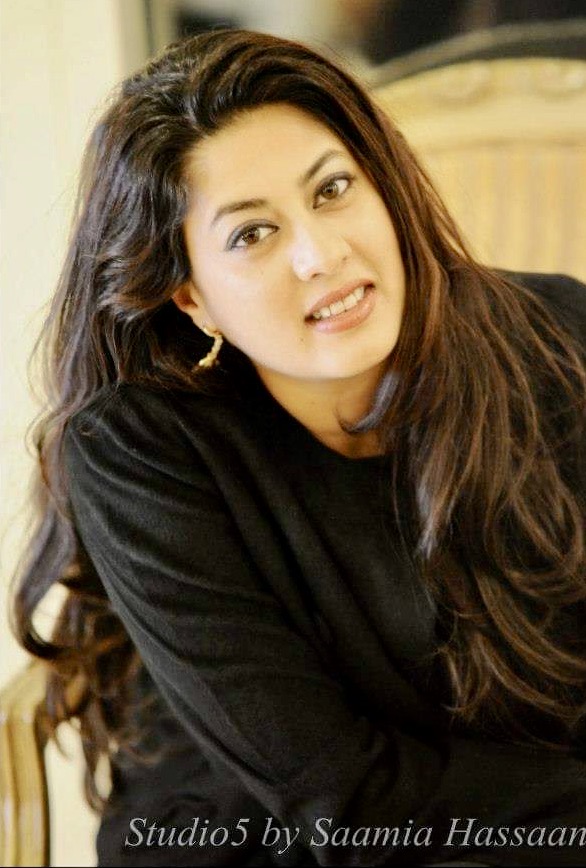 How did you arrive to be a great calligraphy artist and also a teacher of it?

When I moved to Dubai,  I came up with the idea of opening classes of Arabic Calligraphy to all nationalities as I wanted this beautiful art to spread and people to enjoy art. Somehow I started getting a lot of calligraphy projects each unique in nature and in my journey I learnt a lot and improved a lot. From paintings to sculptures to ceramic. 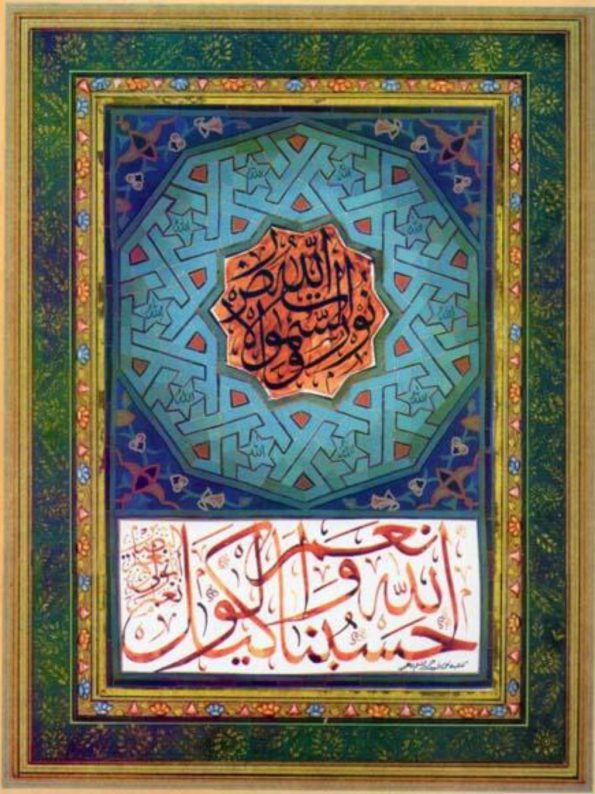 The quality of your artworks is extraordinary. For this reason, you are close to the Royal Houses of Dubai and Abu Dhabi that really appreciate you not only as an artist, but as a teacher.

How was your experience with them?

I have had the royals as one of my best clients and have been very supportive in buying my paintings and also supporting and appreciation of my talent. I found most of them to extremely enlightened and very good people. 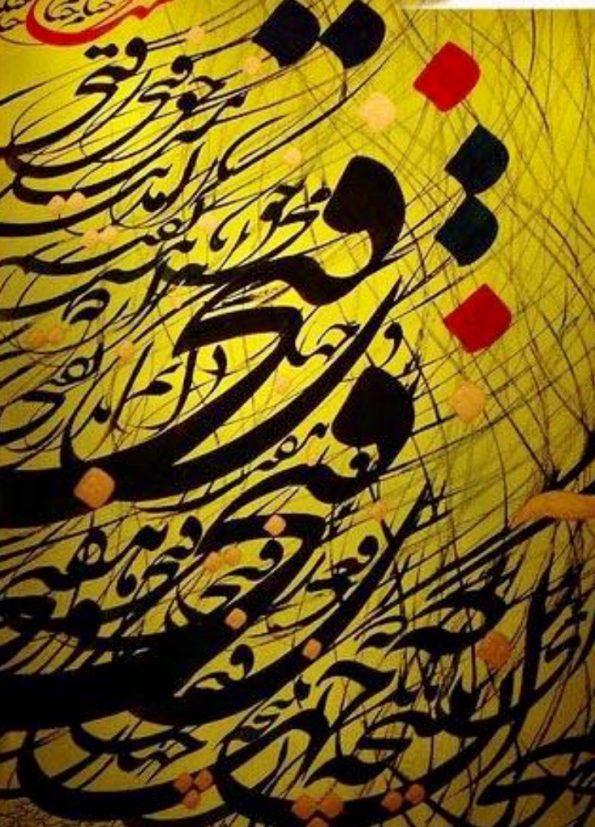 You have studied Visual Communication at the Art Institute of Philadelphia.

I would like to know more about this period and how it influenced you.

This period in the USA influenced me as a designer and have me a lot of knowledge into business and software. It gave me a very good experience of the world and art. My graphic design skills including photoshop help me a lot. The school was very tough but it groomed me a lot with international exposure. 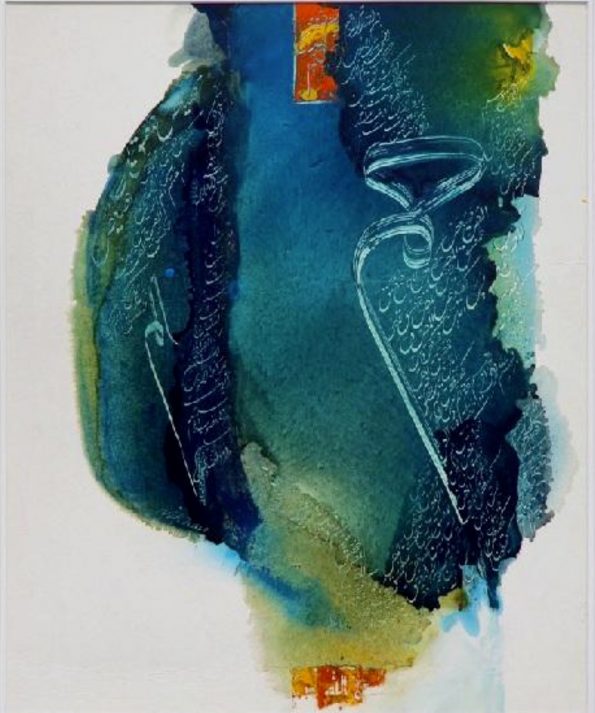 Calligraphy is not easy to learn. You are my second artist specialized in this beautiful and hard art that I have had the pleasure to interview together with Raouf Meftah.

I know you are also collaborating with him. Can you be so kind to advance us about this?

Mr. Raouf was kind enough to ask me send my work so he may publish it. We have yet to collaborate on a project but I shall look forward to that in the near future. 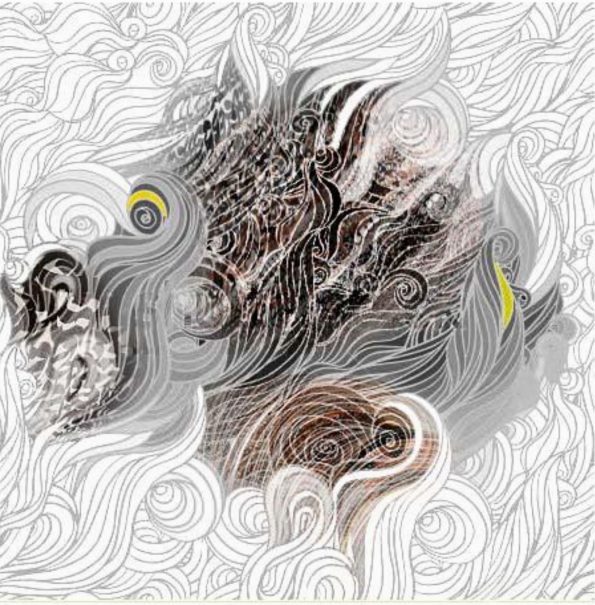 Which difference are there between both?

We both are modern calligrapher. His work is very detailed and mine is free flowing.however it remains that calligraphy is on of the most difficult art forms in the world and I want to create unique things keeping I’m mind that we are in the 21st century. 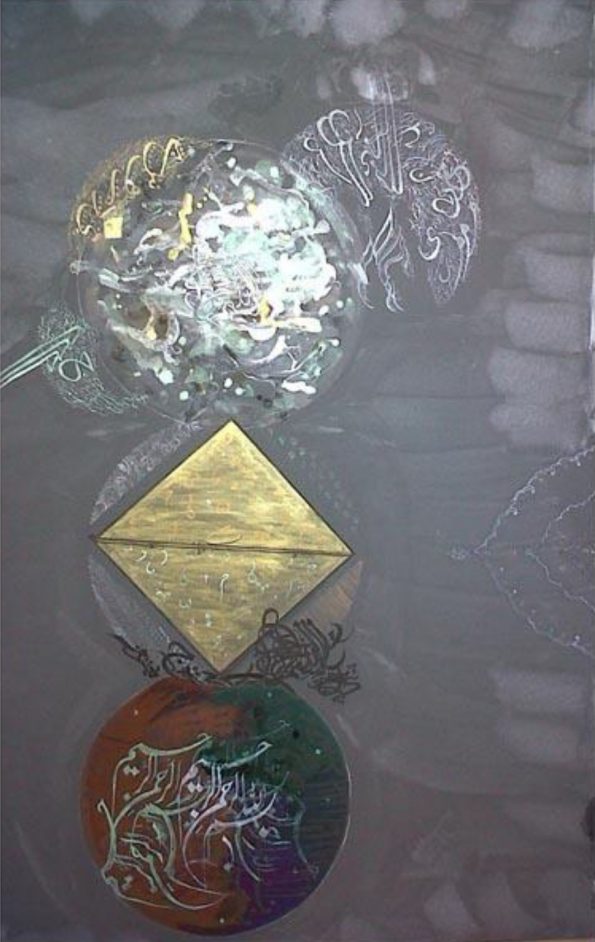 You are an entrepreneur and a visionary in the field of Arabic calligraphy and Islamic arts. What value did you add to both? 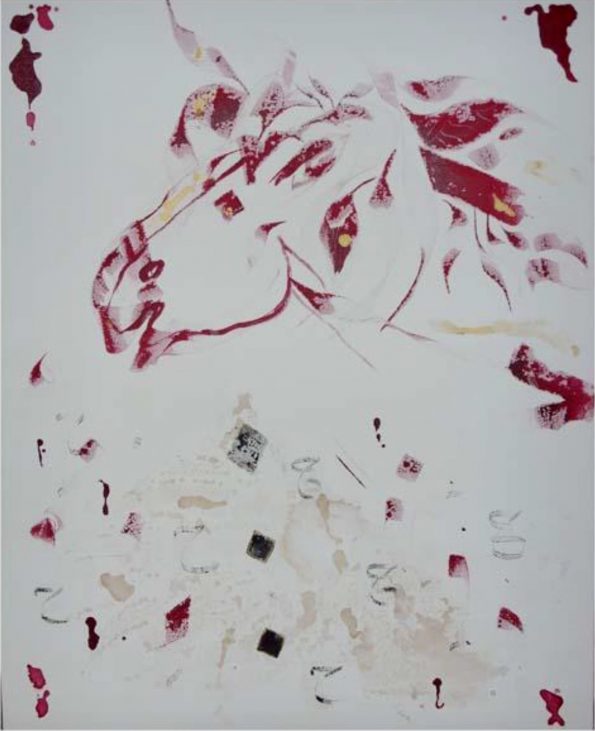 You are a prestigious artist, but I think that you are more than an artist. A smart woman, interesting as professional and with a great future for next years.

How do you see yourself in the five or ten years?

I see myself as a woman, an artist who will take this art to heights by creating unique things, a professional who wants to create business ventures with people or teams using my talents in art and calligraphy.one of my aims is also transformable jewelry. My audience would be the world and it should speak to everyone. 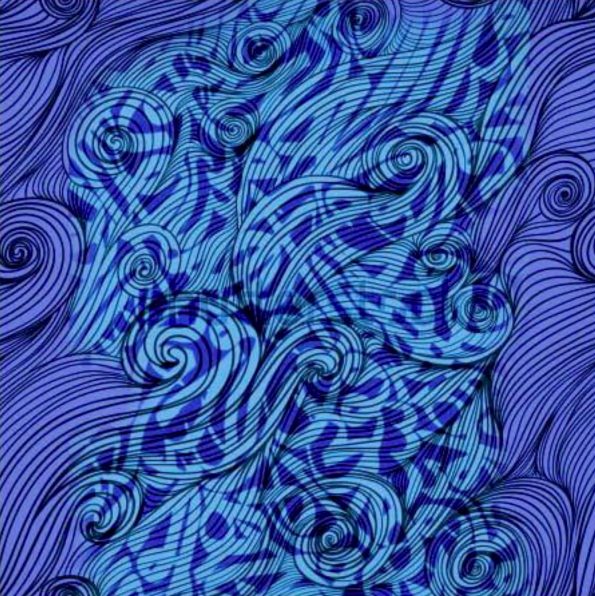 One of the most common thing in all the artists that I have had the opportunity to interview is the spirituality they have. It is necessary to have this kind of essence inside to be a great artist?

Spirituality is either there or it comes through out the years as we live and learn. Spirituality is in people who are not artists but their soul is very nice.so yes in art I think automatically comes from within you as an artist. 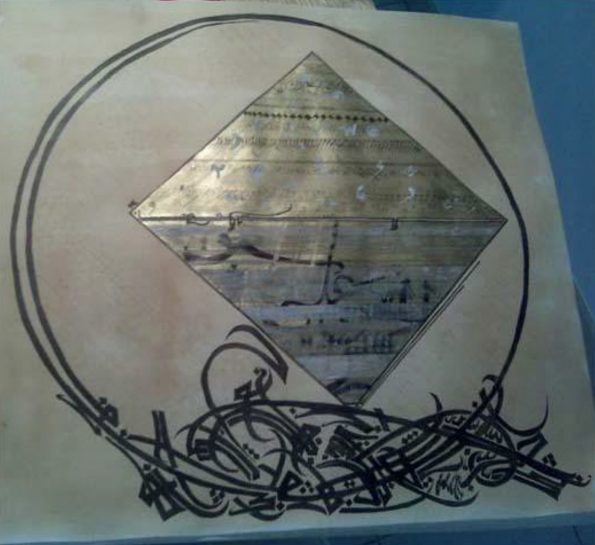 CREATIVE DIRECTOR OF THE HH PRIVATE OFFICE. 2016 till date

GULF NEWS: Video of me called journey of a calligrapher. https://gulfnews.com/videos/news/the-journey-of-pakistani-calligrapher-nadia-rehman-1.1549191832623

A.R. REHMAN: presented guitar with calligraphy by Rumi personally to him as a present from Dubai. Dubai April 2018

ISLAMIC AZAD UNIVERSITY: Professor of arabic and Persian calligraphy. Taught painting,design and how calligraphy can be incorporated in arts along with typefaces. 2014 to 2016 dubai

LEVEL ONE KIDS: painting for children for the Ramadan theme with Arabic calligraphy. Dubai

GALLERY ONE: Commission for paintings for a private collector. Dubai.UAE

DIFC ART NIGHTS AND SIKKA: chosen by liu bolin (famous chines artist who camouflages himself with his backdrop) painted his suit matching the Islamic art backdrop from shiraz, iran.http://www.kleinsungallery.com/projects/the-dubai-arts-and-culture-authority-commissions-liu-bolin. Dubai.UAE

ALTAYER GROUP: Prints Of Paintings In The Head Office Of Al Tayer. Dubai

BLOOMINGDALES: Exhibition Of Paintings With Live Calligraphy On Bags. Dubai

DIVAN OF ROYAL COURT OMANI FINE ARTS SOCIETY: Invited to give workshops on Arabic calligraphy as an international artist for artists for the divan and other upcoming artists representing Oman worldwide. Muscat and Salalah. Oman

ARAB FASHION WEEK: “Royal Signature – Where Art Meets Fashion” This event is been incorporated within the first official Arab Fashion Week in Dubai. This “experience” will create a journey through contemporary Art. Art Installation of Arabic Calligraphy via projector showing patterns with calligraphy for dresses for international market. Dubai 2015 youtube: https://youtu.be/2VK6A1UxCKE

ROSEWOOD HOTEL: Arabic Calligraphy workshop to all the new staff in the 5 star hotel along with presentation to welcome them to U.A.E. Abu Dhabi 2015

CAMPUS ART DUBAI: 30 applicants chosen out of 300 to be part of the campus art dubai membership programme for 6 months.

ABU DHABHI ISLAMIC BANKING FOR WOMEN2013:Calligraphy event for women for writing customized names for all customers.

ESTEE LAUDER STORE JO MALONE INSTORE CALLIGRAPHER 2012: 3 day instore event in the store for a new Arabic oud perfume. Calligraphy was written on all the boxes for people who bought any item from the store.

WOMEN OF THE UAE 2012: Book published by an award winning photographer of 100 women who have achieved and contributed to the United Arab Emirates.

NAMES ON VELVET WITH GOLD 2012: His Highness Sheikh Mohammed bin Rashid Al Maktoum’s grandchildren on suede with photographs and hand prints in pottery

THE ROYAL GARDEN , 2011.Old miniature with Emperor Jahangir’s garden specially painted with the families faces for the Royal family of Abu Dhabi, Private collection.Abu Dhabi.U.A.E.(NOT ALLOWED TO BE SHOWN IN THE PORTFOLIO)

AL-HAMD 2011.Zen style black ink square with a red triangle in which Alhamdulillah is filled with gold.

THE HORSE, 2010.Auctioned off by the Dubai Rotary Club in a charity event in aid of children’s educationheld at the Atlantis Hotel, Dubai, UAE.

MIXED THOUGHTS, 2009. Variation of different styles of calligraphy layered on top of each other in brilliant colours. Private collection,London, UK.

JOY AND SORROW, 2008.Miniature with a woman in red smiling while another is sitting and playing an instrument.Private collection, Tehran, Iran.

Luca Brandi, the introspective of a great Italian painter and sculptor